Towards the 50th Palio del Cerro: a full schedule of news 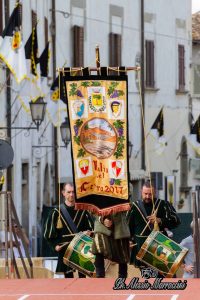 Cerreto Guidi is preparing to relive the emotions of the Palio del Cerro, organized by the Municipality and the Pro Loco Tourist Association, with the fundamental collaboration of the Contrade (Quarters) and the support of other associations. The event, which this year reaches its 50th edition, has the patronage of the Region of Tuscany and is supported by the Banca di Cambiano and Toscana Energia, as main sponsors.

The Palio means to show all year long the passion for its own colours, which give joy and pain; the Palio means to grow since you were a child learning to play in the Palio games or to throw a flag and play the drum; the Palio means to stay together, with the friends of the contrada for dinners or social activities. In conclusion, the Palio is a beautiful tradition that is an integral part of every inhabitant’s life in Cerreto Guidi, and this year it celebrate its important fifty years old. 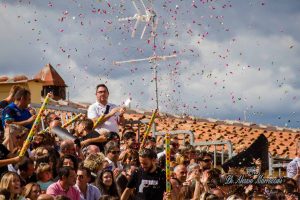 It will be on Saturday 1st September the date of the challenge among the four contrade: Porta Caracosta, Porta Fiorentina, Porta al Palagio and Porta Santa Maria al Pozzolo, which will take place, as usual, in front of the Villa Medicea in  Cerreto Guidi and it will be the highlight of a full schedule of appointments that will occur from Saturday 25th August to Sunday 9th September, in conjunction with Santa Liberata (Saint Liberta’s) celebrations.

The celebrations for the 50th edition of the Palio del Cerro present several news: the eve dinners of the Contrade will be anticipated for the Cerreto Guidi round on Saturday 25th August and on the same day there will be the opening of the exhibition “Ricordi di Palio” (“Memories of Palio”) at the Palazzina dei Cacciatori (Hunter’s Little Residence) dedicated to the 50 years old of history of the event, and the exhibition “Drappi della Vittoria” (“Drapes of Winning”), which will gather together in the spaces under the so-called “ponti medicei” (“Medici bridges”) by Buontalenti, all the “cenci” (“rags”/”drapes”) won by the contrade since 1969 until today.

It will be on Monday 27th August the opening night of the “Settembre Cerretese” (“September in Cerreto Guidi”), which will open with the presentation of the Catalogue dedicated to the Renaissance event and expressly realized to celebrate this important “birthday”; in the following days will be the turn of performances of the contrade, the usual “Sbaracco” (“Clear out”) and the “Cerrino D’Oro” (“Golden Cerrino”) awarding evening.

It will be on Thursday 30th August the institutional evening dedicated to the Blessings of the Palii (Palios), this year painted by a prominent figure of the Italian and international artistic scene as Dario Ballantini; until it gets on Friday 31st August when Cerreto Guidi returns to the Renaissance, enlivening the streets of the city center with a real historical re-enactment where display a central role about 600 figures, with the special participation of the Historical Parade of the Repubblica Fiorentina (Florentine Republic).

The schedule also includes in-depth cultural moments. At the Villa Medicea, starting at 4.00 pm, will take place 3 conferences about themes related to the historical context, which inspire the parade and the games of the Palio del Cerro: on 28 th August it will talk about the history of Renaissance clothes (edited by the Superintendence of Archaeology, Fine Arts and Landscape); on 30th August will be the turn of the history of flags (edited by Andrea Pistilli of the Federazione Italiana Sbandieratori – Flag Throwers Italian Federation); finally, on 31st August, the usual annual appointment with “Le vie dei Medici” (“The Medici Streets”), which will be an opportunity to present the results of the project and potential european developments of this network (edited by Patrizia Vezzosi).

The festivities for the 50th edition of the Palio del Cerro can be heard up in France, precisely in Normandy, in Saint Marcel, leading to Cerreto Guidi a delegation of the twinned town that will contribute to this important celebration.

But it does not end here! A series of events also continued in the following week, awaiting the “Palio dei Ragazzi” (“Palio with Kids”). Among these stands out the evening on Wednesday 5th September with the concert “Bella Prof Tour” (“Good One, Teacher Tour”) by Lorenzo Baglioni in front of the Villa Medicea.

On Saturday 8th September will be young ladies and knights under 12 years old, to contend the desired “cencio” (“rag”/”drape”) of the Palio dei Ragazzi 2018 (Palio with Kids 2018) competing for the similar games of the Palio del Cerro, with the exception of the crossbow replaced by balls throwing and sack races.