THE PALIO DEL CERRO IN THE YEAR OF COSIMO DE MEDICI 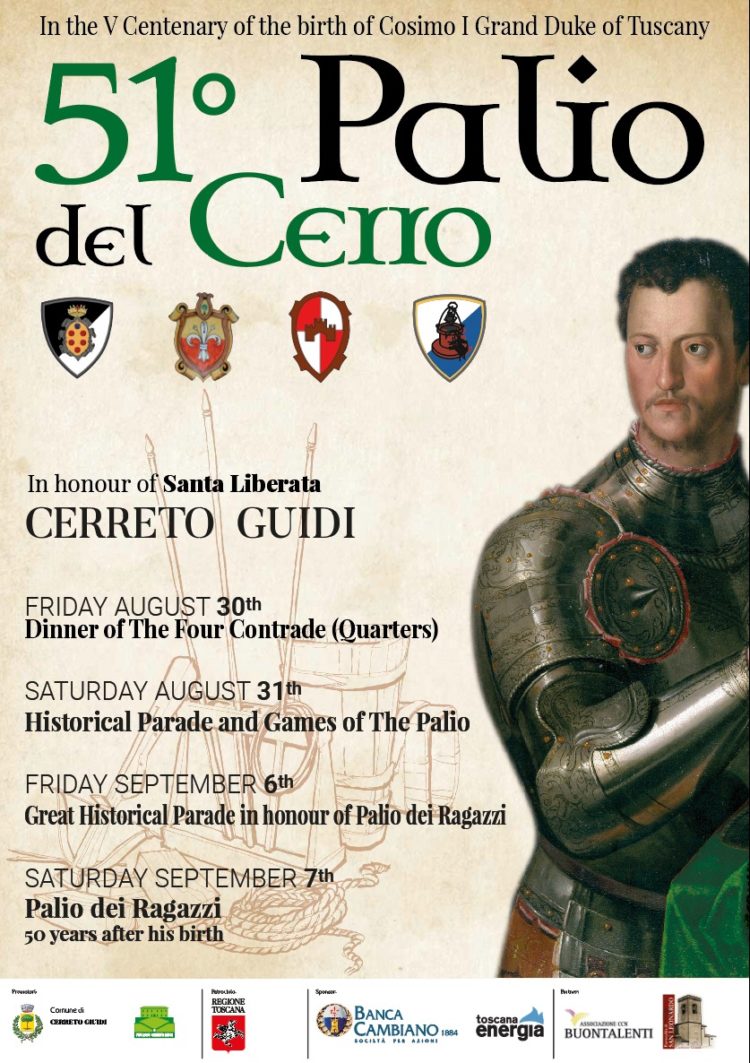 The Cerretese September has a rich program of events with the boys in the foreground, remembering that fabulous 1970, in which the “mini-prize” was born, today so loved by the families of the Medicean village

Cerreto Guidi is entering the climate of the Palio. September Cerretese this year will take place from August 27th to September 8th and will see a program full of initiatives. After the edition of the Cinquantesimo, that took place in 2018 and left an indelible mark on the minds of all the Cerreto people, the 2019 edition promises to be a special. It is in fact linked to two important recurrences: that of the 500 years since the birth of Cosimo Primo de ‘Medici, to whom the historical re-enactment is dedicated, and that of the 50 years since the dispute of the first Palio dei Ragazzi.

It will begin Tuesday, August 27th with the “Sbaracco delle Soffitte”, a cheerful flea market, in which the inhabitants of the town empty cellars and attics and display furniture, objects and utensils of other times now in disuse. Then on Wednesday August 28th, at 9.00 pm, in Piazza Vittorio Emanuele II, we will begin to enter the atmosphere of the Palio, with the performances of the musicians and flag-wavers of the four districts, which will be the overture to the Cerrino d’Oro, the prize which is attributed to those who have particularly distinguished themselves for their commitment in the field of culture, work, entrepreneurship, sport and solidarity, contributing to raising the name of Cerreto Guidi and spreading its image beyond the borders locals. It will be a collective prize again this year, which will go to an association that over the years has carried out an important activity marked by the values ​​of peace, brotherhood among peoples and collaboration between local communities, making Cerreto known beyond the national borders. Many will have already understood who we are talking about but we do not want to tell you everything, so as to let you discover it on the evening of the awards.

Thursday, August 29th, after the traditional procession from Santa Liberata to the Pieve di San Leonardo, in the evocative scenery of the garden in front of the Villa Medicea, the presentation and blessing of the Palios will take place; this year they were painted by the painter from Montopoli Valdarno Mauro Petralli. The Palio dei Ragazzi was instead painted by Alfonso Fantuzzi. The two painters will be given two personal shows respectively from August 29th to September 1st and from September 5th to September 8th.

Then on Friday August 30th the atmosphere will warm up with the dinners on the eve of the Palio, the blessing of the players and the investiture of the Captains. This will lead to the fateful day of Saturday August 31st with the historical procession and the games of the Palio del Cerro.

The week of the Palio dei Ragazzi will be full of events. Of particular note on Wednesday September 4th is the presentation on the stage of the Palio of the “Vocabulary delle Mafie”, a representation on legality, created by the children of the middle schools of Cerreto Guidi, coordinated by the excellent writer, actor and educator Alessandro Gallo, in the scope of project supported by ARCI, SPI CGIL and Soci Coop, which saw a large group of Cerreto students go to Sicily in May on the trail of Peppino Impastato. Then on Thursday September 5th the performance of the boys of the music school of Cerreto Guidi curated by Mirko Dimitrio, who will welcome the traditional Camminata del Sandalo, organized by the Movemento Shalom.

So, to celebrate the fifty years since the first Palio dei Ragazzi, Friday, September 6th a big parade will take place with the participation of groups of young musicians, flag wavers and dancers from Florence, Fucecchio and Montopoli, who will perform on the Palio stage and at the end of the evening all together, with those of the districts of Cerreto they will give life to a great final choreography. All this to greet the Palio dei Ragazzi which will take place on Saturday September 7th and which this year, will be even more heartfelt and attended than usual!